We arrived at the hall as a group of 6, which is a ridiculous number when trying to demo games, but Artificium seated 6 and had a free table, so we played it. I found it ok, but many members of the group were less charitable. It had a bunch of dumb action cards which let you steal from other players, which screwed up the strategy element of the rest of the game somewhat.

I think that the box art is hilarious. 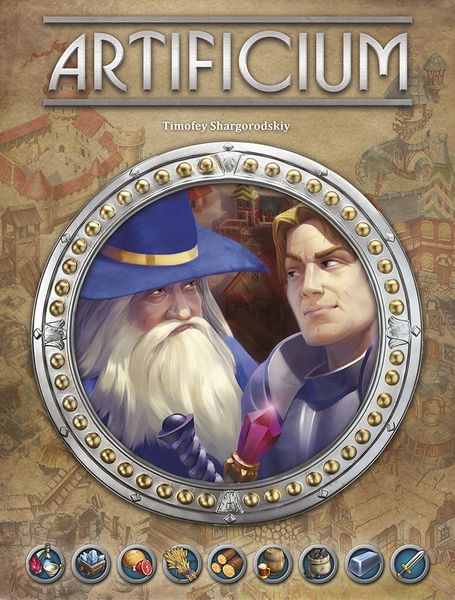 Probably, possibly, the game of the show? Everything I disliked about 7 Wonders (which isn’t much) is gone from this 2 player version. 7 Wonders Duel is fast and harsh and the action starts right away. Every move you can make is incredibly aggressive. We queued for ages to grab a table for this and I don’t regret it at all, it was great. I’ll be buying a copy, I think - it was sadly sold out when we got there though.

Exoplanets has a great theme, but the game fails to deliver. Instantly forgettable. I really like the orbital mechanic that it has, where otherwise unrelated planets can affect each other, but it felt like none of those effects really mattered. Perhaps it’s a game that rewards patience, and all of its little mechanics create a delicate, intricate game among advanced players, but sadly I’ll never find out.

I’ve been wanting to play this for ages because the premise sounded hilarious. Dungeon Fighter is a dungeon crawler in which you attack by throwing dice onto a target, the monsters and weapons affecting how you throw. For example, one monster made us jump and throw the dice in midair. It was indeed pretty funny, but now that I’ve played it, I don’t really feel the need to play it again.

##Welcome To The Dungeon

It’s hard to describe what’s good about Welcome To The Dungeon. There’s this guy, right, who’s going to go into a dungeon, and on your turn, you either add a monster to the dungeon or take some armour or weaponry off the guy, right? Or, if you think it’s all got a bit much, you can pass and leave the round. The last person still in the round then takes the poor, shivering naked warrior and drives him through the dungeon full of monsters you made. If he makes it through, the player wins a point. Does that make sense? The beauty of it comes in the player interactions, when your friend lets a little smirk slip as they drop another monster onto the deck, or someone passes just a little bit too quickly and you wonder what they know. It’s nice. If I didn’t own so many player-interaction-heavy bluffing type games I’d be all over it.

I’m no good at memory games, I sucked hard at Kabuki. Not my cup of tea at all. It’s all about spotting very similar looking masks in piles of cards, and I could barely tell the difference between them when they were right in front of me, let alone when I was trying to remember if the latest card matched one we put down 10 rounds ago.

I made us play Me Want Cookies because it was a giant version with plushy pieces. It was a kids game where you had to solve mazes. It was not good.

Push-a-Monster, on the other hand, is a kid’s game that adults can enjoy too. It’s a simple dexterity game where you try to push as many monsters as you can onto a small platform, and the person that knocks the fewest off wins. The scoring mechanic is extremely cool: each time you knock a monster off, your opponent gets a rectangular monster token. At the end of the game you put your tokens together in a line and the person with the longest line wins. It’s a nice way to avoid counting.

Day 3 was a bit all over the place - lots of fun games though. I also did most of my shopping on this day so I spent it lugging bags around, which really sucked. The Spiel metagame is all about buying games before they run out, playing the games you want to without queueing for too long, and not carrying around too many heavy bags.